Sometimes you might want (or need) to change the default date-time format set in JIRA. Out of the box the format is set to d/MMM/yy, which translates to for instance 1/Jan/13.

In order to change the format for dates and date-times you need to look for four options:

Whereas jira.date.picker.* takes care of settings the format used for date strings, jira.date.time.picker.* sets the desired date-time format. Furthermore, there are two options for each of these settings, one for the client side datepicker (*.javascript.format) and the other for the JAVA formatter (*.java.format).

Be aware of the fact that changing the way dates and datetime strings are display on the client side must conform to the format used on the server side, i.e. the server must be able to interpret the dates posted. Thus, it is required that the JavaScript and JAVA formats specified in the configuration match.

In case your settings do not match you will get an error such as “Please enter the date in the format “d/MMM/yy” when trying to save dates using the date picker.

Possible combinations for these format specifications can be found on Atlassian’s Configuring date picker formats page.

Optionally. you can edit the way dates and datetime are displayed to users through the Look and Feel section in the administration interface (System » User Interface » Look and Feel): 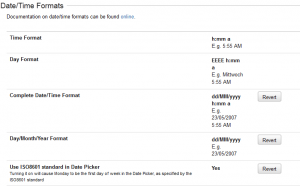 Despite Zend_Date‘s power and elegance to handle all kinds of different date and time formats, it (still) lacks the ability to cope with MySQL’s datetime formated strings out-of-the-box.

Thus, instead of being able to simply do something like

one has to manually define MySQL’s datetime syntax, as shown in the following:

I personally don’t quite see why this commonly used format has not yet been added to Zend_Date.

In the meantime, I have found it to be the most convenient to define the MySQL datetime format string as a constant. Although this is no big deal but still, I would rather like to see this simple piece of formating code inside Zend_Date.

UPDATE
I have come across a strange problem when trying to create new Zend_Date objects using custom formats, such as the MySQL datetime format shown above, e.g.:

Categories: Scripting, Zend Framework
Tags: datetime, format, MySQL, Zend_Date
We use cookies on our website to give you the most relevant experience by remembering your preferences and repeat visits. By clicking “Accept”, you consent to the use of ALL the cookies.
Cookie settingsACCEPT
Manage consent

This website uses cookies to improve your experience while you navigate through the website. Out of these, the cookies that are categorized as necessary are stored on your browser as they are essential for the working of basic functionalities of the website. We also use third-party cookies that help us analyze and understand how you use this website. These cookies will be stored in your browser only with your consent. You also have the option to opt-out of these cookies. But opting out of some of these cookies may affect your browsing experience.
Necessary Always Enabled
Necessary cookies are absolutely essential for the website to function properly. This category only includes cookies that ensures basic functionalities and security features of the website. These cookies do not store any personal information.
SAVE & ACCEPT